The Ultimate Guide to Paris, France

Paris- the City of Love…or is it the City of Light? Either way the place is magical. My first visit to Paris was over Valentine’s Day in 2016. Romantic, right? It was one of the stops on the great European backpacking adventure I took with David. To be honest, after being on the road for 40+ days, we were pretty exhausted when we arrived in Paris and were looking for a few days of rest and relaxation. But once we stepped foot in the city, we couldn’t stop exploring.

There we were in one of the most famously romantic cities in the history of mankind, arguably the center of the Age of Enlightenment, and…it started to pour down rain. We spent a full 50 days in Europe during the winter months, and it rained twice. Both of those days we were in Paris. Not to mention, Paris was experiencing a cold front during our time there. While we both actually love cold weather, we happened to be staying in an Airbnb with no heat and little hot water. I wouldn’t say it was the relaxing Valentine’s Day holiday we were looking for, but we fell in love with the city all the same. In fact, I would say it’s impossible not to fall in love with Paris.

Fast forward to June 2017: David and I returned to Paris with my younger sister, Kelsey, this time during the warm season. Our trip was full of sunshine, baguettes, and French wine- as every trip to Paris should be.

Let me preface this travel guide by saying there is no shortage of activities, delicious food, and adventure to be had in Paris. We have spent over three weeks living in Paris, and could spend another three weeks doing entirely new things. Don’t expect to cover all of Paris in one trip. With that being said, let’s get started. 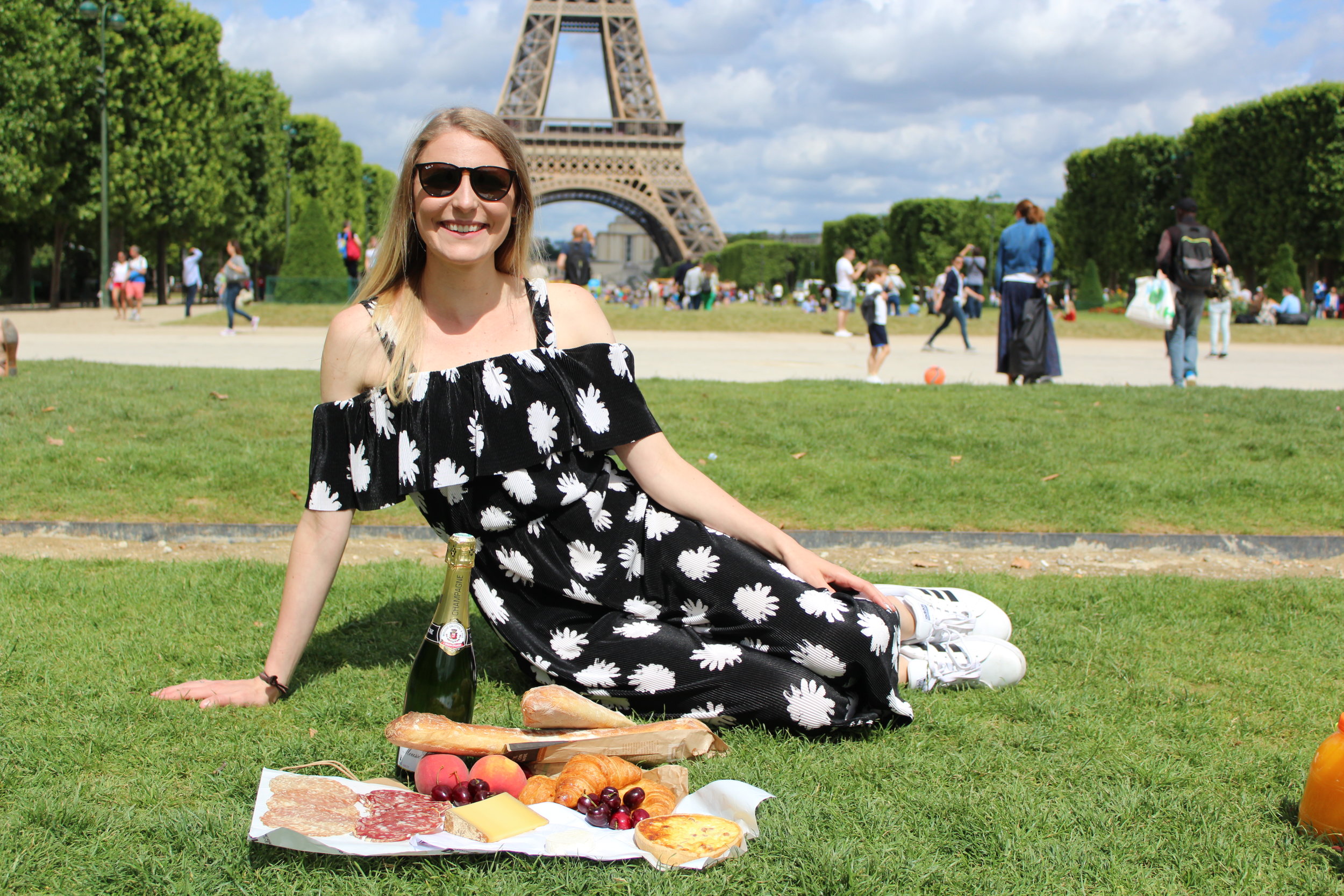 Classic Paris activity and a must on anyone’s first or fifth trip to Paris. It is as impressive as you would expect, and it never gets old. There’s just something about the starkness of the sharp, gray tower with the deep blue sky and soft white clouds behind it. The best place to take a photo is 100 to 200 yards out on the grassy area in front of the tower. Full discloser: I have not been to the top because of the ridiculously long lines, but I hear it’s amazing. If you think that is something you will want to do, book in advance.

I’ll have David write this section, or any section on art museums for that matter. I will say the Mona Lisa was cool to see in person and it’s much smaller like everyone says.

Thanks Colbs. The Louvre is…unlike anything you’ve ever experienced before. There are 35,000 works of art in over 650,000 square feet of space. I’ve heard a lot of different numbers about how long it would take someone to look at every piece of artwork in the museum, but the number ranges from 10 days to 100, so it’s unlikely you will have time to take it all in. The artwork is amazing, with works from da Vinci, Michelangelo, Jacques-Louis David, and (obviously) a lot more. If my Louvre history is correct (and while it definitely is, it certainly may not be), French rulers used to live in this palace and collect artwork from around the world. Napoleon collected most of the most significant pieces during his reign, and sometime after he was exiled the palace became a museum.

There are three pieces everyone recommends. The Mona Lisa is a small painting behind a sheet of bulletproof glass in a room with dozens of people gawking at it and taking hundreds of pictures. Even though all of those things are true, and it’s underwhelming and not worth the struggle through the crowd, you still have to see it. The Winged Victory of Samothrace is just amazing, even though it’s headless. The details are incredible. Just imagine, someone sculpted that. Incredible. And Venus de Milo is beautiful and so lifelike. I recommend seeing all three of these pieces, and the iPad-type thing the Louvre gives you to guide you through its catacombs has a tour just to see them if you’re pressed on time. If you’re looking for more, I’m a fan of anything by Michelangelo or Jacques-Louis David, Napoleon’s chambers are beautifully unique, and the Great Sphinx of Tanis is pretty awesome.

Chaos. Magnificent chaos. Twelve roads all meet at the roundabout surrounding the Arc, plus endless tourists make for a hectic experience. A lot of tourists (I snapped this photo while crossing the street) stand on a street median to take pictures. I can’t say I recommend doing this. It’s dangerous and rude to local Parians.

Most people would probably recommend the Champs Elysee, but I beg to differ. It is full of flagship chain stores and tourists. It’s always good to experience it once, but I prefer to find off-the-beaten path thrift shops. I’m a big fan of European thrift stores because Europeans are chic and classy.

Kilo Shop: Thrift store where you pay by weight

Vintage Désir: Thrift where I purchased the most fabulous leather jacket for less than 30 euros. Address: 32 Rue des Rosiers

A beautiful, breathtaking cathedral and also the site David almost got pick-pocketed by two 12-year old girls. Lines to enter the cathedral can get long but it moves quickly so don’t be deterred. Notre Dame is right on the Seine sandwiched between the Latin Quarter (5th arrondissement) and Le Marais (3rd and 4th arrondissements).

The charming streets of the 5th arrondissement are a must-see. Our first trip to Paris we stayed in the Latin Quarter near the Sorbonne and the Pantheon, and by the second day it felt like home. We really enjoyed strolling the narrow streets and finding cute cafes. The food was delicious, and it was so easy to find little hidden gems. As a word of warning: there are really touristy areas of the Latin Quarter, so depending on where you are, beware of subpar French food and overpriced souvenirs.

The Latin Quarter hosts an open-air style market year-round on Rue Mouffetard, with it being particularly full of vendors on weekend mornings. It is also home to David’s all-time favorite restaurant (see where to eat for deets).

Located in the heart of Montmartre (aka my favorite part of Paris) lies Sacre Couer, a beautiful cathedral at the top of a hill overlooking Paris. Most people come for the view. It is an unbelievable view. There are almost always street performers playing guitars, accordions, and singing. It is a magical place at the tallest point of Paris (besides the Eiffel Tower), and the church is beautiful. It is a hike to get here from the rest of the tourist spots (take the underground), but worth it. Trust me on this one.

Stroll the Streets of Montmartre

After visiting Sacré Cœur, wander around the neighborhood of Montmartre. It is absolutely my favorite place to be in Paris. The sloping hills, gorgeous views, and delicious food make for an excellent time. The streets are filled with boutique shopping, creperies, and street artists, and when you run out of things to do, you can always nip into a cafe or just sit on the steps of the Sacre Coeur. It is also home to the famous Moulin Rouge. If you are walking around after dark, be cautious as some areas south of Moulin Rouge are sketchy.

David’s all-time favorite restaurant. Like in all of the world. The small crepe stall attracts college kids and locals alike to get one of the famous crepe sandwiches. There are endless choices of meats, cheeses, veggies, and sweets so you should have no trouble finding something that sounds delicious.

This might be my favorite café in all of Paris. The cute restaurant is hidden on a side street up from the popular Rue Mouffetard in the Latin Quarter. They offer a variety of soups, salads, and quiches. They also happen to sell the best chocolate tarte in France. I’m too embarrassed to disclose how many I have eaten, but let’s just say it is more than I should. Les Petits Plat is a must every time I visit Paris.

David and I celebrated Valentine’s Day 2016 at this quaint Tibetan restaurant. The cozy, warm atmosphere was the perfect way to celebrate a day of love in the City of Love. The food and service were also fantastic.

If you are looking for an authentic French breakfast or lunch spot, this is your place. We stumbled upon Queen Ann’s while also trying to find the Pompidou. They have the friendliest staff and a large selection of homemade quiche and teas. You will be in the company of French locals stopping in for a quick lunch.

The best falafel in Paris located in the heart of the Jewish Quarter. Take it to-go or dine-in, either way, a falafel gyro makes the perfect snack while in between sight-seeing.

This recommendation came from a local and it did not disappoint. Local French cuisine, friendly and helpful staff, and delicious food. It is a little pricey but worth it. We ordered a variety of plates and shared everything. It books up so make sure to reserve a table in advance.

Sapporo: Rue Saint-Anne near the Louvre

David and I stumbled upon “Little Tokyo” on Rue Saint-Anne on a cold, rainy, Sunday. Maybe it was just the weather, but man this place amazed us. Cheap, delicious ramen on a cold day. There are few things I love more.

Located in the Montmartre neighborhood. We enjoyed the most delicious burger smothered in béchamel sauce and a tasty French beer. I can’t speak to the atmosphere because we ate at 4pm and were the only ones in the restaurant. I will say the classy French men at the bar seemed to be frequent patrons.

The coziest cafe tucked behind Sacre Cœur. The pre-fixed lunch is a great deal and more than enough food to fuel you for an afternoon of walking the steep streets of Montmartre. Pictured is the cowboy chili.

I love Paris. It is magical, romantic, beautiful, classy, and delicious. Paris is a city I feel at home in and I cannot wait to go back! If you are planning a trip to the City of Love, contact us for a free full travel consultation! Au revoir!